Trainings designed and given by PATRIR highly professional and competent personnel actually work !

I've been privileged for having attended trainings given by PATRIR both in Romania and at the European Peace University in Austria. Now, back to my home country, Lebanon, I have been putting into practice everything that I was learned in terms of good practice, models, frameworks for analyzing conflicts and for designing interventions and peacebuilding projects.

PATRIR's staff are living and being the change they are promoting in their trainings and all over the world, which makes their high quality work very valuable and much much needed in a field where war-making and warfare-building still prevail.

In my own mind, PATRIR, has already won this year's prize !!!

Consultant on peacebuilding and conflict transformation

I wish to point out that what I wrote earlier concerns only one
individual, and not PATRIR as a whole. PATRIR has many dedicated and
hard-working, idealistic staff members and volunteers, who do
excellent work around the world, and I deeply appreciate that. What
I wrote was not meant as an accusation, but as a sincere call to
correct a wrong, which can easily be done with an apology to the
injured party and a change in behavior.

When Isaac Newton was praised for his discoveries, he modestly
replied, "If I have seen farther than others, it is because I am a
dwarf standing on the shoulders of giants, like Euclid and
Archimedes." He did not say, "because I am a giant."

Humility, and giving proper credit where it is due, is one
essential characteristics of an effective peacemaker.

I wish to share a story in the praise of honesty:

A king was growing old and knew it was time to choose his
successor. Instead of choosing one of his children, he invited a
group of young people from his kingdom and told them, "It is soon
time for me to step down and choose the next king. I have decided to
choose one of you." The children were shocked, but the king
continued, "I am going to give each one of you a seed today - one
very special seed. I want you to plant the seed, water it, and come
back here one year from today with what you have grown from this
seed. I will then judge the plants that you bring, and the one I
choose will be the next king."

One of the boys, named Liang, went home and excitedly told his
mother the story. She helped him get a pot filled with soil, and he
planted the seed and watered it carefully. Every day, he would water
it and watch to see if it had grown. After about three weeks, some
of the other youths began to talk about their seeds and the plants
that were beginning to grow. Liang kept checking his seed, but
nothing ever grew. Three weeks, four weeks, five weeks went by, still
nothing. By now, others were talking about their plants, but Liang
didn't have a plant and he felt like a failure. Six months went by
-- still nothing in Liang's pot.

He knew his seed had died. Everyone else had trees or flowers,
but he had nothing. Liang didn't say anything to his friends, he just
kept waiting for his seed to grow. A year finally went by and all the
youths of the kingdom brought their plants to the king for
inspection. Liang told his mother that he wasn't going to take an
empty pot. But his mother asked him to be honest about what happened.
Liang felt very uncomfortable, but he knew his mother was right. He
took his empty pot to the palace. He was amazed at the variety of
plants grown by the other youths. They were beautiful -- in all
shapes and sizes. Liang put his empty pot on the floor and many of
the other children laughed at him.

When the king arrived, he surveyed the room and greeted the
young people. Liang tried to hide in the back. "My, what great
plants, trees, and flowers you have grown," said the king. "Today one
of you will be appointed the next king!"

Suddenly the king spotted Liang at the back of the room with his
empty pot. He ordered his guards to bring him to the front. Liang was
terrified. He thought, "The king knows I'm a failure! Maybe he will
have me punished!"

When Liang got to the front, the king asked his name. "My name
is Liang," he replied. All the kids were laughing and making fun of
him. The king asked everyone to quiet down. He looked at Liang, and
then announced to the crowd, "The name of your new king is Liang!"

Liang couldn't believe it. He couldn't even grow his seed, how
could he be the new king?

Then the king said, "One year ago today, I gave everyone here
a seed. I told you to take the seed, plant it, water it, and bring
it back to me today. But I gave you all boiled seeds that would not
grow. All of you, except Liang, have brought me trees and plants and
flowers. When you found that the seed would not grow, you substituted
another seed for the one I gave you. Liang was the only one with the
courage and honesty to bring me a pot with my seed in it. Therefore,
he is the one who will be the new king!"

If you plant honesty, you will reap trust.

With deep appreciation and best wishes to all the members of
PATRIR who work for peace under often difficult conditions, Dietrich
Fischer

I have worked for a number of years as one of the Gandhi Peace Libray librarians within the Peace Action Training and Reseach Institute of Romania (PATRIR).

Without any doubt I can say that PATRIR is a life changing experience for anybody that comes across its people and wonderful resources. I have seen so many people being transformed from ordinary people into extraordinary peace workers doing amazing work all over the world. Without exaggerating, I can say that it is an oasis of hope, light and fresh new ideas in a world suffocated by consumerism and selfishness.

I genuinely wish there was a PATRIR in every city of the world.

As President of FOYA Cyprus I have had the opportunity of working closely with PATRIR. PATRIR is truly an organization deserving of this prize as not only have they been involved in promoting the cause of peace in Romania but their International Training Programs are of high quality and caliber.

I am very happy to see PATRIR nominated for the World Vision Peace Prize!

What is absolutely striking about PATRIR, from my point of view, is the fact that it has the supreme ability of gathering around the most wonderful, passionate and committed people.  They work together beautifully and each and every one of them I have had the chance to meet gives me the feeling that they are not made for here, as their goals in life and passion seem to be more than us, mortals, are used to!  :) Thus, I admire them greately!

I have had the chance to volunteer in some of their events and participate in others - it has each time been a beautiful experience and I am grateful for that.

Hoping that they will receive the award, as I personally have the conviction they deserve it,

PATRIR is a great organization. Passioned people that want to change their communities. I have been volunteering for them few times and their attitude impressed me. Even though most of their actions are internationally, they have good and strong local projects as well, focused on peace and development education.

Wish them the best and a good work, because they have proved that world can be changed and peace can be done. 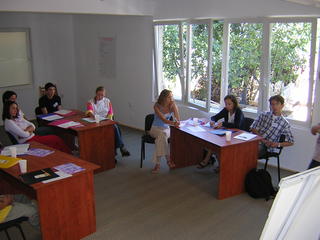 I've met the PATRIR team at a seminar meant to Celebrate Diversity and Multiculturalism in Cluj Napoca.

At this seminar I was profoundly impressed by the commitment, dedication and professionalism of the PATRIR team.

I am sincerely supporting PATRIR's nomination for the Peace Prize.

As a partner in Glocal Tour project they are doing amazing work, specially Paula Tonea and Stafania Sabo. You have my full support. For all others... PATRIR is great to work with. You can see and fill the spirit!

I must say that since i became associated with PATRIR,my knowledge and information in the area of peacebuilding, conflict transformation and post war recovery has increased and improved tremendously.

The time i spent physically at PATRIR did not only improve my learning but enabled me establish networks and friends that i surely believe will last for a very very long time. I wish to say that i am sincerely grateful to all friends and staff of PATRIR and strongly recommended PATRIR for the award!